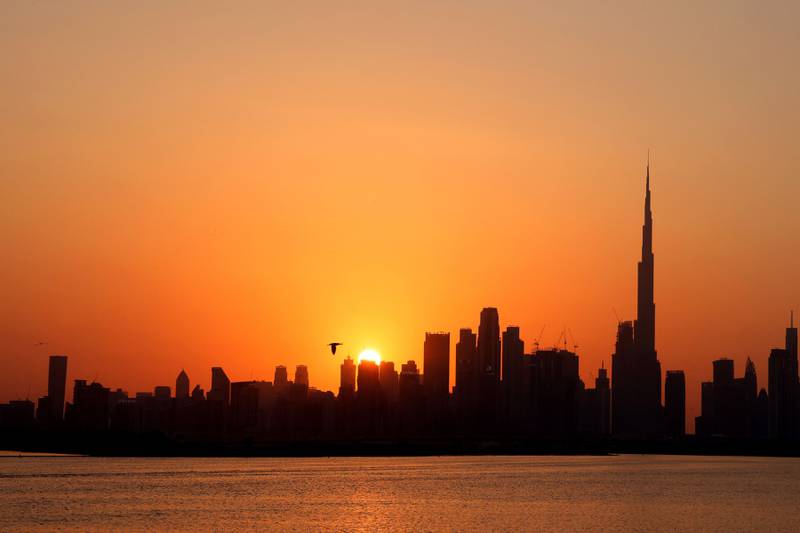 The UAE’s non-oil economy expanded an annual 7.8 per cent in the fourth-quarter of 2021, driven by easing of pandemic-related restrictions and travel curbs, which boosted local and global demand, the latest figures from the Central Bank of the UAE show.

While overall real gross domestic product grew at an estimated 2.3 per cent in 2021, the central bank expects the economic momentum to pick up pace this year, maintaining its 4.2 per cent growth projection, the CBUAE said in its Quarterly Economic Review.

The non-oil economy is estimated to have expanded 3.8 per cent in 2021 and is projected to grow 3.9 per cent this year.

The oil economy, which contracted 1.4 per cent in 2021 on the back of production curbs agreed with the Opec+ countries, is expected to grow 5 per cent in 2022, as the 23-member alliance of producers brings additional crude to the market.

The UAE’s oil production in the last three months of 2021 rose 9.3 per cent, the central bank data showed.

The UAE economy, which contracted 6.1 per cent in 2020 on the back of the global economic slowdown, has bounced back strongly. The recovery has been driven by pandemic-mitigation measures and Dh388 billion ($105.72bn) in fiscal and monetary support since the onset of the global health crisis.

The stimulus includes the central bank’s Dh50bn Targeted Economic Support Scheme to boost liquidity in the financial and banking sector, parts of which have been extended to June 2022.

The UAE’s economy is expected to grow 4.9 per cent in 2022, Japan’s largest lender MUFG said, while Emirates NBD forecasts growth of 5.7 per cent and Abu Dhabi Commercial Bank estimates a 5 per cent expansion, supported by a strong uptick in the oil sector. Emirates NBD estimates the non-oil economy will grow 4 per cent, while ADCB forecasts an expansion of 3.5 per cent.

Pandemic-mitigation measures have also helped to drive growth in the Arab world’s second-largest economy. The number of Covid-19 cases in the UAE, which has one of the highest vaccination rates in the world, has consistently remained low as the country opens its economy further and continues to remove pandemic-related restrictions.

“The UAE continues to be a leader in containing the spread of the coronavirus, which, in turn, supports the country’s economic recovery,” the CBUAE said.

“At the end of Q4 2021, 92 per cent of the eligible population was fully vaccinated and 100 per cent received at least one dose.”

The average seasonally-adjusted UAE Purchasing Managers’ Index increased 11.3 per cent on annual basis in the fourth quarter of 2021, moving further up in the expansion zone to 55.6 in December.

It was the highest PMI reading since mid-2019, and is “supported by the benefits of Expo 2020, the relaxing of the Covid -19 restrictions that boosted travel and tourism, higher export orders, and a regain in domestic demand”, the central bank said.

Consumer prices accelerated in the last quarter of 2021 with inflation increasing 2.3 per cent year-on-year, compared to 0.6 per cent increase in the third quarter of last year.

The CBUAE projected a 2.7 per cent average headline inflation for 2022. Inflation reached 3.3 per cent in the first three months of this year.

“The main drivers would be the pickup in energy prices, imported inflation that is expected to be record high globally, rising wages and the continuation of the declining trend of rents,” the regulator said.

“Yet, upward risks remain significant due to the war in Ukraine, with potential disruption in the oil markets and supply chains, in addition to higher food prices.”

The real estate sector, a key component of the country’s economy, also continued to recover in the fourth quarter of last year, with residential property prices rising both on annual and quarterly basis in Dubai and Abu Dhabi, the central bank said.

Property prices in Dubai increased 9.1 per cent on average in the last quarter of 2021, figures compiled by the Dubai Land Department show. In Abu Dhabi, the average price per square metre rose for a fourth consecutive quarter, climbing 1.4 per cent year-on-year in the last three months of 2021, the CBUAE said, citing Reidin house price index data.

The hospitality sector also continued to rebound, with data in Dubai showing hotel occupancy rising to 82 per cent from 63 per cent in the last quarter of 2020.

“With the effective handling of vaccinations and tests, the UAE succeeded in becoming an attractive destination post-Covid-19, as seen in the rebound in tourism and hospitality in Q4 2021.