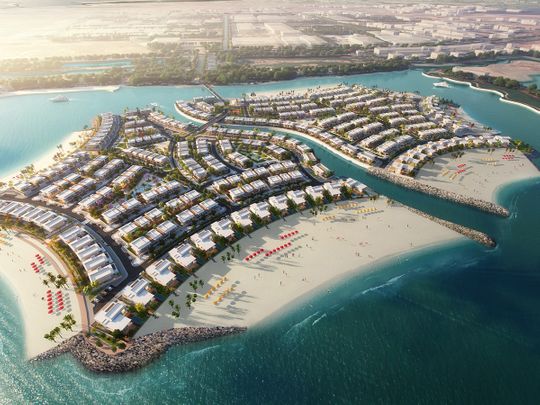 Dubai: Ras Al Khaimah will expand its freehold footprint further and closer to Dubai over the next decade and more as the emirate records a significant rise in new investments.

“The emirate is still working on the preliminary masterplan and the best-use scenarios,” said Benoy Kurien, Group CEO at Al Hamra, which was one of the first freehold-designated developments in the UAE back in the early 2000s. “That means the areas further south from Al Hamra and all the way to Al Marjan Islands, which is already seeing a lot of build activity.

“What we have seen is with the entry of Wynn Resorts and others, there is a lot of investment inflow, both from in-country and outside. The new areas to be developed will have extensive beachfronts – these coming 10-15 years will be about Ras Al Khaimah.” (The emirate in January also launched a new entity to oversee all of the resorts in the emirate.)

For its next project, Al Hamra is not waiting that long. It has launched a Dh1 billion ‘Falcon Island’ project right in the centre of Al Hamra. Featuring two islands split by a canal, it will have townhouses and villas, with the base price set at Dh1 million for a two-bedroom townhouse and Dh15 million plus for a seven-bedroom home. Units on the first island, totalling 250 homes, are being released today, and pre-sales have already netted quite a bit of sales.

Construction on both islands should start simultaneously by June/July and with the first phases to be ready in another 24-28 months. (Property buyers can ask for 12-year visa and business license along with the homes if they need to.)

The Al Hamra already has a resident base of more than 7,000 across its 4,000 residential units. There are five hotels and a golf course plus marina. The Al Hamra Mall, one of the first projects at the site, was in the news recently for being acquired by Abu Dhabi master-developer Aldar Properties for Dh400 million.

“We hadn’t put the Al Hamra Mall for sale, which since 2008 had generated good returns for us,” said the CEO. “After 13 years, it was ready for the next phase of expansion, which was when the Aldar offer came. They were looking for existing, income-generating properties and Al Hamra Mall was what they wanted.

The deal – which was Aldar’s first UAE move outside of Abu Dhabi – fetched Dh400 million for Al Hamra, and which sets it up perfectly for the Falcon Island venture. On whether Al Hamra will consider selling other built assets – the marina or the Troon-managed gold course – Kurien said all offers would be considered.

Last year, Al Hamra launched a promotion offering 12-year visas and a business license for property investors. It was part of a wider move to generate renewed interest in investments at a time when the property market was gradually finding its feet from the COVID-19 created interruptions.

“In that offer, we included this as part of our offer price on the homes sold at the time,” said Kurien. “At the Falcon Island, these features are not included – however, investors can still access them by paying extra.”

There is also another ‘island’ project that is yet to be built at Al Hamra, according to the CEO. “The Falcon Island is what our attention will be on project-wise. Al Hamra Village is developed to around the 85 per cent mark, which is why we will be needing more land shortly for a fresh chapter.”

Heading further south will be part of that move.

RAK’S LEGACY ATTRACTION
Al Hamra Village – whose design was inspired by an Arabic leitmotif – takes up 77 million square foot and currently is home to around 4,000 villas, townhouses and apartments. The other attractions for residents and visitors is the 18-hole championship golf course and 1,600 yards of beaches, a marina and luxury hotels.