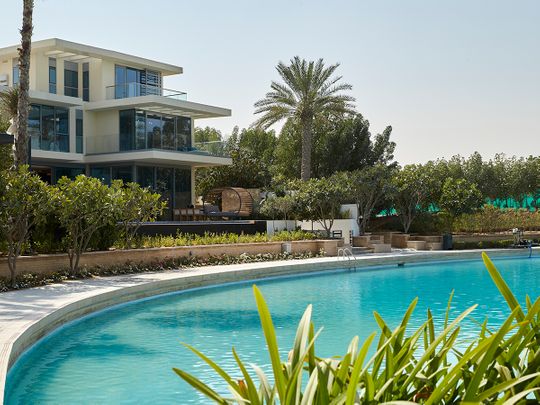 Dubai: Investor demand running at its peak, with all offplan releases being met with instant sellout. So, what does a developer in Dubai decide to do?

Reduce the number of homes that will be built as per the original masterplan.

Yes, that’s what Majid Al Futtaim Communities did at its ‘Tilal Al Ghaf’ residential community in Dubai, even though it was one of the first projects in Dubai to feel the full boost in demand spike after the initial Covid months of 2020. That’s right, since September 2020, Tilal Al Ghaf’s sales charts has been on one hot streak.

That was also the moment when the developer decided it was not going to build up to 5,000 apartments the masterplan had provided for. Instead, the developer went all out on more villas and townhouses. The units vary from 2,152 square feet to 13,885, and with prices listing for Dh2.9 million upwards for a four-bedroom. There is also a Dh16 million, six-bedroom home on the listings.

“The intent was to position Tilal Al Ghaf solely as a single-family luxury community – and that’s why the apartment buildings had to go,” said Hawazen Esber, CEO at Majid Al Futtaim Communities. “We decided that in a world that was emerging from the COVID-19 lockdown phase, property buyers would be looking for more space.

“That’s exactly what we came up with – and removing the apartment buildings in full was about emphasising less is more.

“I won’t say removing the apartments was a gamble. Yes, those were still testing times for the market, especially after Covid, but we decided it was worth taking a calculated risk. For a developer who’s built a ski slope in the desert, we knew all about taking calculated risks.”

A marker for Dubai property’s upturn

In 2021, Dubai real estate delivered Dh14 billion worth of transactions, making for its best performance in a decade. Buyers, residents and those from overseas who wanted base themselves in Dubai, were picking up everything that was available in the market. Provided these homes came with bigger spaces and offered much more of a direct connect with nature.

After five years of declines, Dubai’s real estate was staging that big comeback. The real start of that upturn, however, started in the final months of 2020 – and it was Tilal Al Ghaf that felt it most. A new wave of buyers discovered it, and any available unit in the secondary market was snapped up instantly. It was then the developer came up with a new round of off plan launches – with the same response from buyers. (In the secondary market, villas at Tilal Al Ghaf have seen 8-15 per cent value gains since late 2020.)

WATER AND LAND
The Lagoon Al Ghaf will sparkle and shine over 10 hectares. Tilal Al Ghaf itself sits on 3 million square metres.

These owners will be able to move into their homes – totalling 960 units – from December this year, with another set – about 1,000 homes – scheduled to do so 12 months later.

Bring the ‘beach’ in

They will be getting a lot more than just extra living space and plenty of green. Tilal Al Ghaf will come with a water body that will double up as a beach for residents. “Whether they want to use it for a swim or for any type of water sports activity, one thing we can assure them is of the quality of the water there,” said Esber. “There will be no chemical additives – we are making sure we create elements of nature as they were meant to be.”

In time, more than 10,000 residents will call the villas and townhouses at Tilal Al Ghaf their home. The retail component will also be a niche offering – with the first “premium Carrefour store” finding a spot there.

“The retail options need to match the wider community – that explains why the focus is on speciality brands, even when it comes to the F&B choices,” the CEO added.

Recently, the developer came up with a new residential offplan release as it moves closer to adding all the elements in the masterplan. “Whether with the homes, the greenery, and the beach, we got all the details right,” said Esber. “If all that means there are potential investors wishing they had bought here earlier, we would have achieved what we set out to do.”