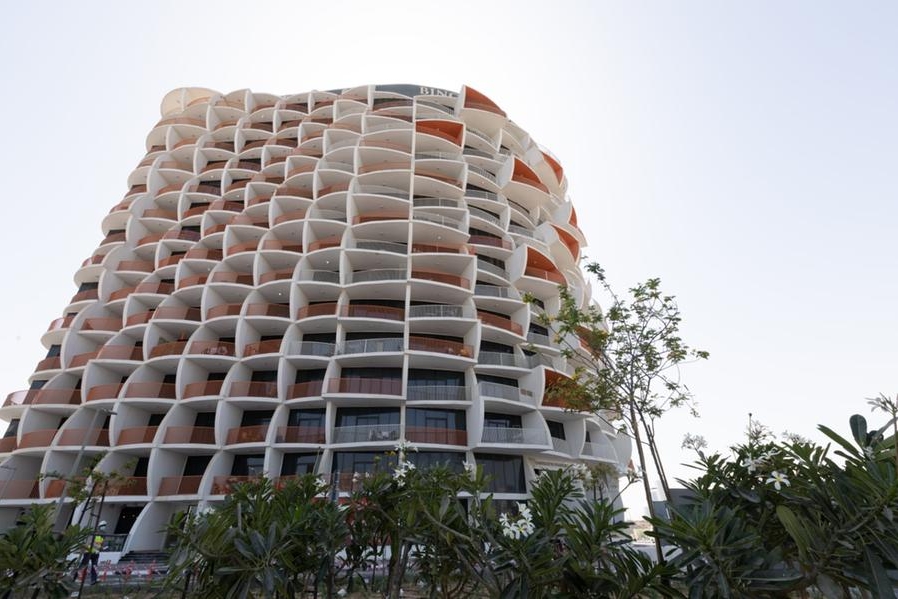 The iconic project was designed by Binghatti, one of the fastest-growing companies in Dubai, known for its vast portfolio of real estate projects with groundbreaking architectural design. The façade of the building emulates seashells found in the region to pay homage to Dubai’s deep pearl diving tradition.

Binghatti Pearls sculpts a voluptuous profile in Dubai’s most innovative district. The project was launched in 2016 and was completed in 2017, comprising 313 exquisite apartments. The overall design of the hyper property relies on the multiplication of geometrical units constructing the exterior envelopes of the façade that is aesthetic in form and constructive in function.

“We are deeply honored by this distinguished recognition given by the Dubai Culture and Arts Authority to Binghatti Pearls among all the prodigious architectural wonders in Dubai. We believe that conceptualizing and building this modern work of art can be a catalyst to cultivate a culture of innovation and ingenuity that will make Dubai a hub of architectural masterpieces not just in the region but also in the world.”, said Muhammad Binghatti, CEO & Head of Architecture.

Muhammad believes that Dubai has a profound and inimitable history that can be shared with the international sphere. From that notion, he developed the concept of Binghatti Pearls, taking inspiration from the city’s deep-rooted culture and applying Binghatti’s design principle to form an astounding work of art that reflects Dubai’s innovative and dynamic ethos.

“Dubai has established an exceptional architectural heritage shaping the world with its famous quintessential towers marked by international standards, innovation, and advanced technology. Binghatti shares the common vision and aims to make bold statements in the real estate sector. Over the years, we have developed a unique architectural code that enables us to launch projects that are highly aesthetics but supremely ecological,” he added.

He revealed each architectural concept would go through a series of creative processes and revisions to come up with an ingenious design such as Binghatti Pearls. The design stage does not end with the concept but is developed through comprehensive market research, and value-engineering exercises to ensure that the property is not just artistically appealing but also practical for the end users. He further explained that the rise of the construction industry in Dubai has introduced architectural and engineering methods for developers and contracting companies to constantly reinvent and cater to the ever-changing needs of their clientele.

“The quest for greatness is an endless pursuit. Dubai is currently operates a highly active real estate market. Real estate developers need to consider technical aspects of design and planning while striving to uphold Dubai’s esteemed reputation, especially in the high-end sector of the market, where it’s known for. As the designer and the developer, my stand would always be the same, Binghatti only competes with Binghatti. Our aim, as a company would always be to deliver higher quality projects to make people’s lives better. This is our driving force and our central aim since our inception”, he explained.

Binghatti Pearls was listed alongside the world’s most prominent architectural giants such as The Burj Khalifa, The Burj Al Arab, and the most recently opened, Museum of The Future.  The Burj Khalifa currently stands as the tallest tower, with a total height of 829.8 meters while The Burj Al Arab, the only 7-star hotel in the world is adorned with its sail-shaped structure. And lastly, the newly opened museum is listed as one of the world’s most beautiful museums by National Geographic with its stainless-steel cladding featuring intricate calligraphy. This, indeed, marks a significant milestone for Binghatti, creating its own global imprint, especially in the real estate sector.

Apart from Binghatti Pearls, the real estate developer is also known for their extensive portfolio of architectural projects. Many of their projects are spread across the most prominent locations in Dubai such as Business Bay, Downtown, Jumeirah Village Circle, and Dubai Silicon Oasis. Most of these have received several prestigious recognitions, year after year from the government of Dubai due to their unique architectural style and highly innovative engineering practice. The company is also dubbed, numerous times, as one of the fastest real estate companies delivering high-quality projects in a fast manner, handing over thousands of residential and retail units, way in advance of their scheduled handovers.

Binghatti has bold plans for expansion in the coming years, especially in the higher-end sector as they have incorporated Artificial Intelligence (AI) integrated systems as their major shift towards assimilating automotive-inspired technology into their projects. Recently, Binghatti has proudly introduced its latest innovation, the flyback prototype generation 1.0. This AI-integrated system allows unlimited control for end-users through voice recognition software, enabling control of components such as air-conditioning, lighting, and blinds, providing optimal comfort at home for end users.

“Binghatti’s focus now is being a regional trendsetter, an industry leader in the global market that aims to constantly develop real estate projects that the world hasn’t seen before. Dubai has successfully created an economic environment that fosters this culture – and we stand in our commitment to turn this city as the main architectural hub of the world”, he concluded.