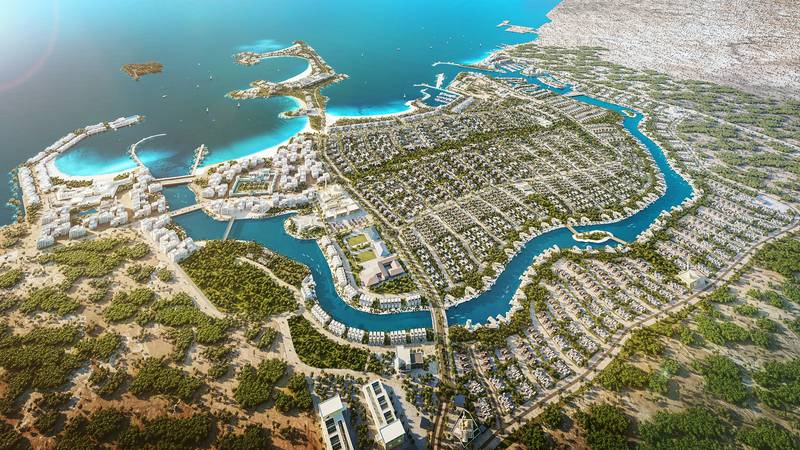 The second phase of a residential community within Imkan’s “Riviera” project on the coast between Abu Dhabi and Dubai has been launched.

The new phase of AlJurf Gardens will feature 98 villas within the Dh15 billion ($4.08bn), 370-hectare AlJurf masterplan, which stretches 1.6 kilometres along the Arabian Gulf coast. The first phase, comprising 293 small, “ranch-like” villas, is due to be completed by mid-2023.

The project, which has a strong emphasis on nature, seeks to conserve the existing 100,000 trees, sea turtles and other wildlife at the Ghantoot reserve, creating a coastal “retreat” for UAE city dwellers, similar to New York’s The Hamptons, the developer said.

“The launch of AlJurf Gardens Phase 2 demonstrates our commitment to delivering prime residential destinations for investors and end-users amid booming real estate demand in the UAE,” said Parvin Al Awadhi, head of development at Imkan Properties.

The second phase villas will come in two styles — Joud and Budoor.

Joud is inspired by rich tradition of Arabic homes in the region with intimate courtyards, majlis and maqa’ads, all designed for family living, Imkan said.

The Budoor villas, in contrast, have a design inspired from the basic elements of the Arabian desert tent, and will be available as two, three, four and five-bedroom options.

AlJurf Gardens will include a private marina, a private beach and a large central park stretching across the community with play areas and sports amenities.

Imkan’s other key projects in the UAE include Pixel, a mixed-use community in its Makers District development on Reem Island, luxury beachside villa community Nudra, Saadiyat, and Sheikha Fatima Park.

A host of major launches have been announced in Abu Dhabi this year, including the Louvre Residences Abu Dhabi, the Grove District on Saadiyat Island and Reem Hills on Reem Island.

They come at a time when property prices have been rising in the capital and more so in Dubai in the past year, as the UAE economy picks up after the coronavirus-induced slowdown.

Average residential property prices in Abu Dhabi increased 1.5 per cent in the 12 months to March 2022, CBRE reported in its first-quarter market review.

Abu Dhabi recorded 3,304 property deals worth Dh11.3bn in the first quarter of this year, the emirate’s Department of Municipalities and Transport (DMT) said.